Since 1968, the Valcamonica Symposium, promoted by the Centro Camuno, is the traditional occasion for the international meeting and discussion among the rock-art scholars and researchers. This year it reaches the XXVI edition and it will be held from 9th  to 12th  September 2015 with a renewed look and under the direction of a new scientific committee.

The Camonica valley has been inserted in the UNESCO World Heritage List from 1979, and it has been a laboratory of experimental techniques in the rock-art recording and analysis. Here it has seen the light the method of recording directly on the surface with transparent material, which is used in most of the rock art sites.

After 50 years it has arrived the time to understand where we are now regarding the methods, discoveries and perspectives, also taking in consideration the new technologies applied to archaeology and which should find a place also in the study of the rock art. The Valcamonica Symposium 2015 will be a big event where to meet and discuss on the roc art recording and study for researchers and scholars from different institutions and research centres around the world

To date the fixed sessions are:

The symposium will be open to the public, the speeches printed on the Pre-proceedings and also freely available on-line on the dedicated website page (access from www.ccsp.it).

There will be side events to the Symposium which will involve the Valcamonica territory, such as exhibitions, show, educational activities for children, guided tour to archaeological sites and other. 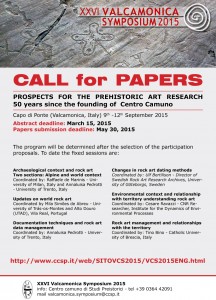